Gina Ismene Chitty is an Australian pianist, composer and author. debussycat had the opportunity to interview her and discuss her latest book.  Dr. Gina Ismene Chitty, primarily an Australian classical concert pianist and composer, has performed in the USA, West Germany, India, Australia and Sri Lanka. She was a winner of a Tchaikovsky Piano Competition held in Sri Lanka and was awarded a scholarship at the Moscow Conservatorium. However, a family diplomatic appointment took her to Washington D.C. where she graduated with a B. Mus majoring in piano performance from the George Washington University. She continued her postgraduate work at the American University and later at Sydney University. Gina was awarded a Ph.D at the Contemporary Music department at Macquarie University in Sydney in 2006. She has performed at various venues in Washington DC, with solo piano performances at Meridian House International, George Washington University and recorded performances on WGMS, Washington DC Radio Station. In Sydney she has had performances of her compositions, as well as major works by well-known composers. Gina has performed as a soloist playing the piano concerti of Beethoven, Liszt and Rachmaninoff.

Gina’s research for her Ph.d involved analysing Afro Lusitanian music genres in diasporic communities, with a focus on the Sri Lankan diaspora in Sydney, and their ambivalent attitudes toward the dance and music forms of the hybrid baila. Baila is a genre of popular dance music which originated among the Kaffir people (a group whose ethnicity comprises a blend of Portuguese, African and native Sinhalese). Gina outlines the engagement of diasporic communities with the music of their homeland in her book Public Postures, Private Positions. This book includes some of the findings of her doctoral research. The book was released in 2010 and focuses on an interesting sociological perspective, hitherto never addressed in academia. Sydney Sri Lankans are a diverse community, and Gina has a field day analysing and studying the often ambivalent and surprising attitudes of this group towards the baila genre. The more anglicised Sri Lankan migrants and the less anglicised migrants have contrasting and different attitudes and ideas about the baila, as do their offspring. Public Postures, Private Positions is an amusing and interesting engagement of diasporic communities with this particular strand of music of their homeland. Gina is presently writing a book The Transitional Motifs in the Late Piano Sonatas of Beethoven as well as a book about Sri Lanka where she addresses the very early years of her childhood, with anecdotes about the quaint community of academics in the University of Peradeniya where her father, Senator Doric De Souza and mother Violet de Souza (former head of the University library) were domiciled.

Public Postures, Private Positions is available from Amazon here and is a must have for sociologists and ethnomusicologists. 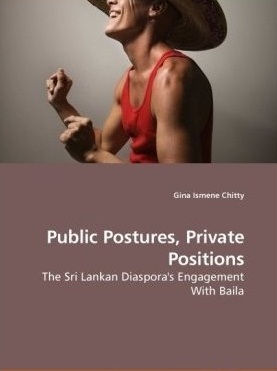 <a href=”Follow”>http://www.bloglovin.com/blog/2603512/debussycat?claim=gzx4zym8yms”>Follow my blog with bloglovin</a>