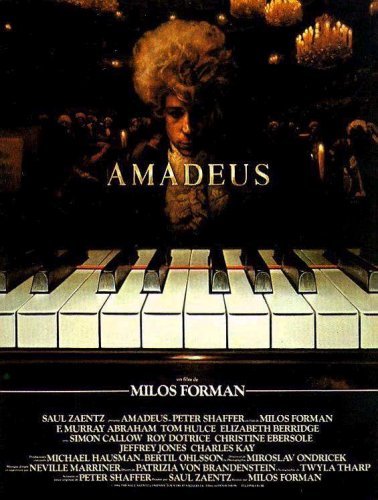 Amadeus (1984) is available from Amazon.com. Click on image to purchase.

No. 97 is Mozart’s Requiem – Lacrimosa. Composed in Vienna in 1791, the Requiem has been featured on countless movie soundtracks. Lacrimosa is the 8th movement of the Requiem, and the most famous. Mozart died before finishing the Requiem at the young age of 35, and Franz Xaver Süssmayr completed and delivered the Requiem to Count Franz von Wasell. The Count had commissioned the piece for a requiem Mass to commemorate his wife’s death (which, incidentally, fell on Valentine’s Day – how tragic!).  Count Franz von Wassell commissioned the extensive work anonymously,and it is likely that he intended to put his own name on it.  Perhaps he would be a household name had he succeeded, but Mozart’s unexpected death and a benefit concert for his widow put a spanner in the works.  In the critically acclaimed 1984 film adaptation of Peter Shaffer’s highly fictionalised stage play Amadeus, it is suggested that it was not Franz von Wassell but Salieri (the famous Italian composer of the Habsburg Court) who anonymously commissioned Mozart’s Requiem.  If you haven’t seen it yet, Amadeus really is a first class film which is sure to ignite your passion for Mozart as it did mine.